The Book of Ra slot, it’s probably one of the handfulss of slots that has had a monumental impact on the online gaming industry! It’s the name passionate slot players know. As a matter of fact, it’s the slot machine which is the bridge between online casino players and the ones who’d rather visit the local pub to play this game, or the local bricks-and-mortar casino.

This saga started in 2005 and it’s been evolving for more than a decade. Is it ever going to end? Find out in our Book of Ra slot review! 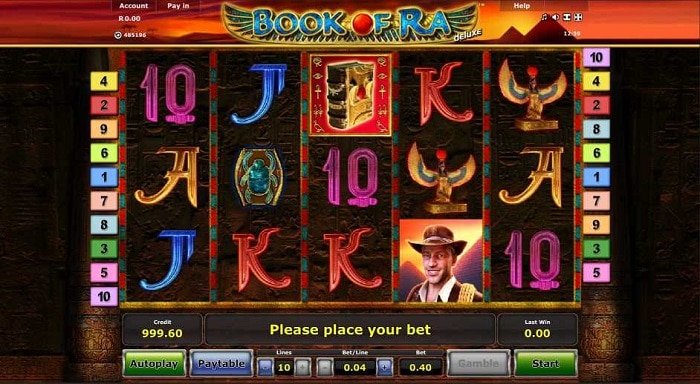 Where to Play the Book of Ra Slot?

Fortunately for UK casino players, Book of Ra slots are still available at big-time, renowned online casinos. Now, you may not be able to find free spins bonus deals, or bonus offers which feature Book of Ra in particular, but you will be able to play it online. Why is this important? In essence, it was German casino players that made this game popular! And surprisingly, today, it’s not available to them online.

Nevertheless, here are 3 online casinos that will make it possible for you to play Book of Ra online.

What is Book of Ra?

At the time of its release, Book of Ra caught land-based casinos by surprise, becoming the biggest and the best thing slot players have seen, ever! The table above just confirms that simple is always better. Its success is entirely based on the revolutionary bonus game, which we’re going to discuss later on. It may not seem like much, but to reiterate, Book of Ra’s reels started spinning back in 2005.

Getting Free Spins seemed too good to miss out on at the time. We can all relate to this situation, which is why online casino studios rarely release a slot game without Free Spins, or without any other bonus elements. Fun fact, in 2005, fruit slots were still a big thing. Video Slots the likes of Book of Ra were making their baby steps.

Bear in mind, the information in the table above shows you the details of Book of Ra Deluxe.

How to Play Book of Ra Slot?

It depends on which Book of Ra game you’re playing. If it’s the most recent one at the time of writing, then you might have to cover a few extra steps. If, on the other hand, you’re about to play some of the now classic Book of Ra slots, there are no out of the ordinary measures you should consider.

You should also GAMBLE or COLLECT when you win. Now, although we’d advise avoiding the gamble features, just because it doubles the house edge, many players are into it and are making profit. In case you’re wondering what the Gamble feature this, here’s a brief explanation. You should basically guess the colour of the card, is it going to be black or red, and if you get it right, the winnings of that particular spin are doubled. If you get it wrong, you lose it all. In simple words, it’s double or nothing.

Book of Ra Fundamentals: Symbols and Return to Player

Not much has changed through the years in respect to the general design of the symbols, or the overall theme. After all, should this happen, the Book of Ra story is doomed to end. The “Explorer” and Egyptian Artifacts take the spotlight, and they’re the highest paying symbols. In all honesty, this is what makes players feel comfortable playing the new releases. We’ve witnessed how casino game studios try to revamp a game, only to see them fail, just because they’ve changed the game to its core. 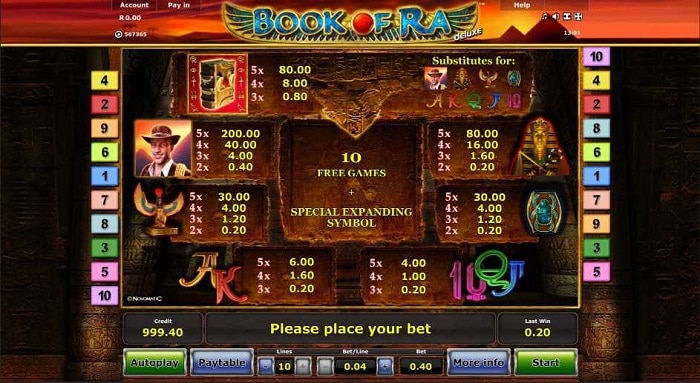 The Book of Ra symbol is the symbol you want to see most of, because it grants you Free Bonus Rounds. This slot may vary from one Book of Ra version to another, but it usually stands out.

Book of Ra’s RTP is in the range of 94% to 96%, which is not all that bad, but it’s not overly exciting as well. It’s just what a slot machine should be.

All Book of Ra slot variations are special in their own way, but when it comes to the bonus feature, and/or the bonus elements, they are not all that different, to be honest. If you’re going to take a Book of Ra slot game for the first time ever, you will not be impressed by it, but after a while, it becomes alluring, addictive if we may say so, and all thanks to the frequency and amount of wins. There’s definitely a lot of science behind the algorithm.

The Book of Ra Deluxe bonus round is triggered when you land 3 or more Book symbols, no wonder the name Book of Ra. You get 10 Book of Ra Free Games and a Special Expanding Symbol. This, the added bonus element to the free spins, this is what makes almost every Book of Ra slot version different. We’re going to cover all of them. 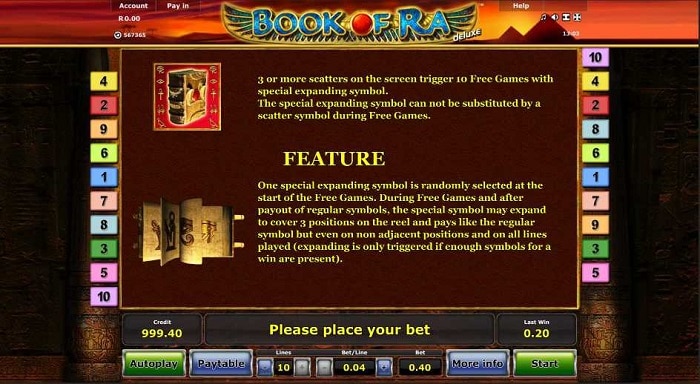 In terms of the jackpot, Book of Ra is absolutely amazing! It became sort of a benchmark for other video slots. With 500,000 coins up for grabs, it’s rather rare to come across a player that won’t be enticed to give it a go. Then again, like all other aspects of the game, the jackpot grew as well! The 6 Reel Book of Ra slot, or commonly known as Book of Ra Deluxe 6, comes with an even bigger jackpot.

Many would argue that the entire Book of Ra series is dull, repetitive and that it doesn’t deserve the attention and the credit it’s getting for the promotion of online gaming. In order to explain why it’s important, and how it became an influencer, we’re going to go through each of the Book of Ra slot games and point out the important aspects.

The first of many, the Book of Ra Classic paved the way for Novomatic’s subsequent releases and cemented their position in the gaming industry. It features the distinct 10 Free Games bonus round, and the enviable jackpot, which can be yours if you land 5 x Explorer symbols on a winning line. Believe it or not, the Gamble feature was part of the first edition of Book of Ra slot.

Plus, the graphics don’t look like much, but in 2005 this was the real deal. The audio is generic, identical to what you can hear playing classic fruit slot machines.

A year after the initial release, Egyptian Experience was introduced. This time around, the audio was slightly improved, it got the polyphonic touch, and instead of 10 Free Games, there are 15 Egyptian Experience Free Spins, which you can re-trigger, getting more Free Rounds. The video and the story were slightly changed, but it’s easy to realize that this slot was part of the Book of Ra series.

It’s sort of a mix of Egyptian Experience and the Classic Version of Book of Ra slot, in terms of the theme, the interface and the graphics & audio package. The jackpot is almost double the amount you can win playing Book of Ra Classic, and the Scatter is slightly changed. Instead of a Book, it shows a Pyramid with an Eye on top. The bonus round here grants 15 Free Spins with a multiplier factor of 3.

After 3 years of the first version, we finally got Book of Ra Deluxe, which has had the biggest impact out of all Book of Ra releases, with the exception of the last one. The Deluxe version comes with a bonus round that can bring you up to 10 Free Spins with a Special Expanding Symbol.

Dynasty of Ra marked a whole new era of Book of Ra. The 6-year break, with a couple of extra Egyptian themed slot releases in between, was good enough reason for Novomatic to launch another slot game which depicts the Ancient Egyptian history, this time around, one that revolves around Bastet, which is the cat goddess daughter of Ra.

Landing 3 Eye of Ra symbols will get you 10 Free Games with special expanding symbols that cover the entire reel. Let it be noted that from this point, all slots come with cutting edge graphics for the time of their release.

Dynasty of Ra is the first of the three slot releases for 2014.

Millions of fans, hundreds of thousands of players from all across the globe, and Book of Ra got its first promo video, which only reaffirmed its position. You will go on a quest to find Bastet’s mask, and you will come across a 4 level mystery progressive jackpot – Gold, Silver, Bronze, and Iron. Now, you won’t find this particular slot online, but we felt like taking you through it as well.

Again, this is an exclusive slot available at land-based casinos only. It never went online, unlike the slot machine which started it all, the Book of Ra classic! Needless to say, the unique aspect of this slot game is the significantly larger number of paylines. Players could ramp up the play and the bet sizes with the 40 paylines, something that is rather uncommon for Novomatic, which found it difficult to step away from the 9-10 payline rule.

The last of its kind, for now, it’s the Book of Ra Magic! It brought major improvements in the graphic and audio department, but the gameplay and rules of the game were kept intact, almost. To be honest, the audio isn’t upgraded that much, but it sounds slightly better.

Nothing’s changed in the Paytable, and frankly speaking, we’re happy that this is actually the case. They managed to keep the “spirit” the “tradition” behind Book of Ra for 13 years. It’d been a shame to have this ruined.

We mentioned earlier how Book of Ra has had a big influence on the gaming industry, on slot games in particular. Since it’s been around for more than a decade, there actually are people who grew up seeing Book of Ra’s reels spinning. We’re going to give you only 2 other examples which are greatly influenced by Book of Ra.

A slot machine which needs no introduction, but only if you’ve just recently joined the online gaming community. Book of Dead is sort of the 2.0 version of Book of Ra. It’s designed on the same principle, following the same theme, and with the same qualities in mind. However, it’s produced by Play’n Go, which means it’s available in certain markets. It’s favourite of casino operators, casino players, and you can actually get quite a lot of free spins!

Stakelogic went a bit too far with the whole “inspired by a competitor” thing. They’ve even copied the bonus game, to the T! In other words, it’s an exact replica of Book of Ra, only you don’t get to hear the mesmerizing audio. Moreover, the Scatter symbol is the Book!

If you’re really into the Ancient Egypt theme, you can’t go wrong with Mega Moolah Isis, which, in simple words, is Mega Moolah in Egypt. That’s the most popular progressive jackpot slot in the world with a bit of “Egypt” all over it.

Conclusion: An Iconic Online Slot Machine that Changed the Industry

Book of Ra, produced by Novomatic, has done a great favour to the online gaming industry. It was the “familiarity factor” which enabled land-based players with the drive to go online. The iconic face of Book of Ra has conquered Europe, but its impact echoed around the world. The recipe for success is a secret, but we obviously know the result. 9 Book of Ra versions, millions of entertained players, and hundreds of millions paid out in prizes, undisputed to this very day.