Jimi Hendrix, a rock icon which needs no introduction! NetEnt’s delivered a masterpiece based on this superstar, which rounded up their hard-rock trio, including Motorhead, Guns N’ Roses and Jimi Hendrix! All three are action-packed, with a variety of bonus games, but Jimi Hendrix has the “groovy” factor. Players who want to cut to the chase can find the top 3 online casino sites that offer the Jimi Hendrix slot. Note, it’s a widely available game! NetEnt made sure each and every casino promotes it adequately. This is Casino Deal’s Jimi Hendrix slot review!

Finding an online casino that offers the Jimi Hendrix slot is quite easy. It feels like we’re not saying this as often as we’d like to, but that’s the truth. At the time of its release, there were hundreds of Jimi Hendrix free spins bonus offers, but, today, we’re facing a different situation. The only free spins you’re going to get are a part of the slot game, which, is not all that bad. Nevertheless, here are the online casinos we’d like to point out as reliable, generous, fair and still offer the Jimi Hendrix slot. 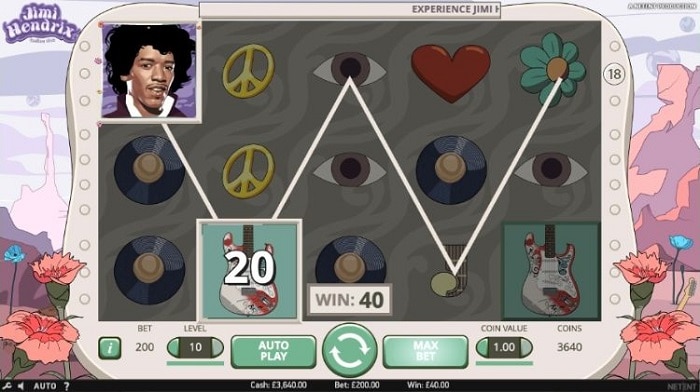 Play Jimi Hendrix Slot Now!
Most players find the interface uncommon, for the most part because NetEnt rarely experiments with it, and this isn’t anything bad. However, we have to admit, it does look a bit odd, but not the interface, rather the symbol grid and outline of the reels. For what it’s worth, this could be just us. We prefer straight, sharp edges. This way we can easily focus on the action!

How to Play Jimi Hendrix Slot?

The Jimi Hendrix slot features a 5×3 symbol grid and 20 paylines in total. Players cannot increase or decrease the number of active paylines, but players can adjust the bet level and the coin value. Because of this, both high rollers and casual players can unlock the true potential of the Jimi Hendrix slot machine. Just to be clear that we’re on the same page, here’s are step by step instructions on what you should do, to NOT spend your cash balance in one spin:

Adjust the Coin Value (0.01 to 1.00)
Set the Coin Level (number of coins per line 1 to 10)
Double check the Bet Amount below the Spin Button
If the Bet Amount is OK, you can Spin the Reels
Check AutoPlay options if you don’t want to spin the reels manually.

Unlike some other software providers, NetEnt is an online casino software provider that does not pull any dirty tricks that will benefit the operator in a shady way. This is why NetEnt is reluctant to change their user interface. Even the slightest change can cause a cascade of problems.

The “art” of the symbols fits the theme, but we think that NetEnt could’ve taken it to the next level. By removing the card symbols, 10 to K altogether and by adding more symbols that are associated with Jimi’s era. Jimi Hendrix himself represents the Wild symbol and the “sub-woofer/speaker” is the Scatter. The thing that we like from this perspective is the unique guitar symbols which represent each of the free spins games. 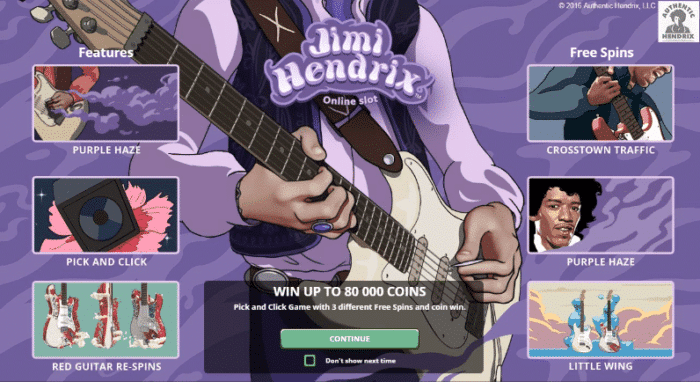 It’s a pretty colourful video slot, and what can you expect from a star from this era. You don’t have to be an expert to spot the hints left in every segment of the slot game. We already said it’s rich with content, and that it comes with several different bonus games. Now, not all of them are that rewarding, but they sure contribute in their own way.

One of his most popular songs, Purple Haze is the flagship bonus feature in the video slot. It can be activated in the main game along with another bonus game called Red Guitar Re-spin, which we’re going to talk about later. To trigger the Purple Haze feature, you must land the Purple Haze symbol on reel 1. If you successfully do so, the symbols 10, J, Q, K and A turn into Wild symbols, but only for that spin in particular.

The second bonus game that can be triggered from the main game is the Red Guitar Re-spin. It’s exactly what you think it is, sort of. Unlike the previous bonus game, you will have to land 4 Red Guitar symbols on the reels. The best part, you can win additional re-spins if you land 4 such symbols in the following spin.

Which one is better? It depends on whether you land another Re-spin or not. In all honesty, we like the Purple Haze feature more, just because it is not so volatile.

Those scatter symbols have a purpose after all. If you manage to land 3 of them, on reels 3, 4 and 5, you will trigger the Pick and Click feature. That’s what it’s called, and to be honest, NetEnt could’ve done better. It just doesn’t fit the theme. However, this is the feature you want to see most of in the Jimi Hendrix slot. Why? Because it unlocks a variety of free spins, that are not only exciting but rewarding as well. 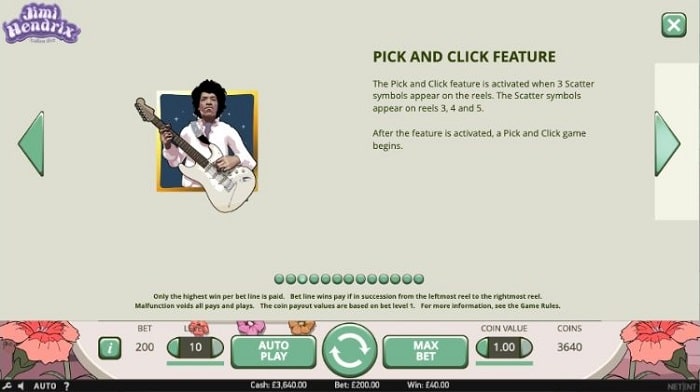 Now, before we dive into the details of the free spins you can win with the Pick and Click feature, let’s get the coin win out of the way. You can win a random prize in the range of 8x to 30x the bet amount, plain and simple. High rollers should definitely be excited about it, as 30x is quite the prize. Yes, it’s not 1000x but the Pick and Click feature triggers quite often.

Depending on the symbols you reveal in the Pick and Click feature, you can win one of the:

Personally, we’d stick to the Free Spins, like the Crosstown Traffic Free Spins for instance. If you reveal 3 Crosstown Traffic symbols, these bonus rounds are triggered. It comes with huge profit potential because it introduces Wild Reels! You get 6 free rounds, and during the first round, the reel 5 is wild, on the 2nd spin it’s reels 4 and 5, and on the 3rd spin it’s reels 3 and 4. Slowly, the wave moves from right to left. On the final spin, only reel 1 is wild.

Similar to Crosstown Traffic Free Spins, Purple Haze also rewards players with at least 6 free rounds, but up to 12! Moreover, you don’t get to see any Wild reels, but you will get extra wild symbols. The least rewarding symbols, A, K, Q, J and 10 are turned into Wilds! Now, this basically changes the game. Imagine that the paytable has no low paying symbols. You need 3 Purple Haze Free Spins symbols to trigger this bonus game. 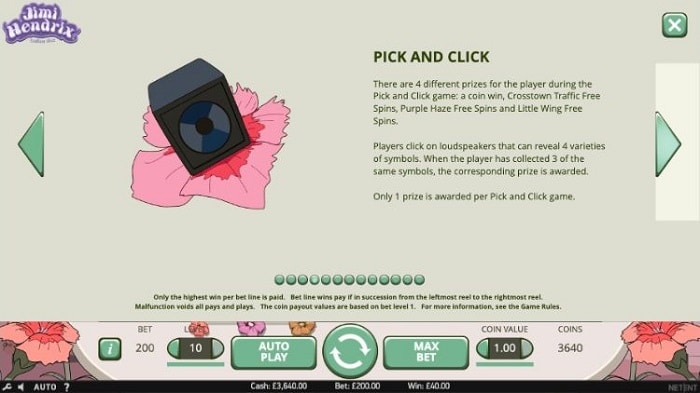 Last but not least, the Little Wing Free Spins bonus round is triggered when you reveal 3 symbols of this kind. It awards between 6 and 12 free spins, but there are no Wild reels, or regular symbols turned Wilds. Instead, this bonus game introduces Overlay Wild Symbols. They have the same role as regular Wild symbols, but they appear randomly on the reels. They take random positions for every turn. In our opinion, this is the most volatile out of all three.

Moreover, if we have the option to choose which free spins bonus game we get, it’d be Crosstown Traffic Free Spins. Wild Reels are too good of an opportunity to be left out.

Slightly above the average, with 96.9%, Jimi Hendrix slot fares well if compared to other slots in this category. It’s not exceptionally rewarding like Dead or Alive, or Blood Suckers, but it’s getting there. The key point to note, unlike other slots, Jimi Hendrix comes with several different bonus games which take the theoretical return to player slightly down. However, if you are fortunate enough, to land a few of these triggers in a small number of spins, you are in for a big treat!

You don’t have to be a fan of Jimi Hendrix to enjoy the variety of free spins available, and that one safe outcome; the coin win. It perfectly rounds up the idea behind NetEnt’s three rock-themed slots. With Jimi Hendrix, there’s something for everyone. Unfortunately, there aren’t that many free spin offers nowadays. In other words, you missed the opportunity, because when the game was launched, literally every casino mentioned it on their promotions page. We really enjoyed doing this Jimi Hendrix slot review, so much so, that we actually recommend it. 😄